I bought some hard root beer not too long ago and wasn’t crazy about it. I still had some left over and didn’t want it to go to waste. I had success making a quick bread with hard apple cider, so I thought I would give making bread with the hard root beer a try. It turned out great! It smelled and tasted just like root beer and didn’t have the funky beer aftertaste. It was a big hit with the family. 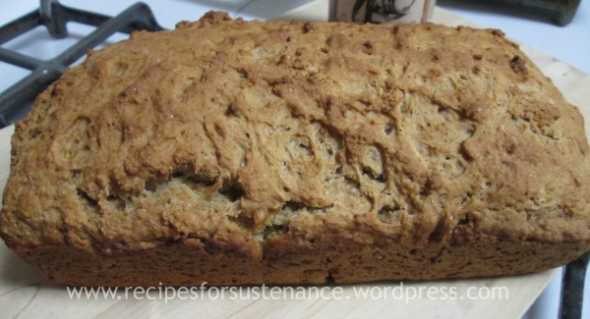 Spray a bread loaf pan with cooking spray, then pour the batter into the pan. Bake at 375º for 45 minutes. Cool completely before removing the loaf from the bread pan to slice. 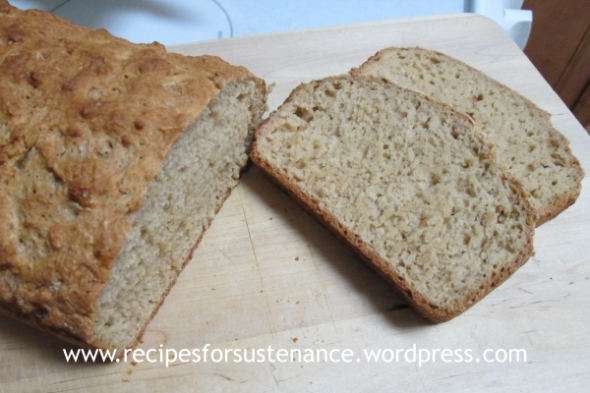 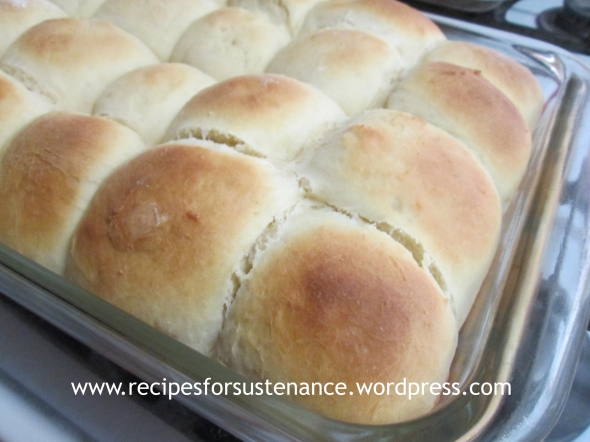 Many years ago, I got some free samples of Easy to Bake, Easy to Make recipe cards in the mail and this recipe was included. I have been making these rolls ever since.

These rolls are super easy to make, especially since you don’t have to knead the dough. You can keep the dough in the fridge for up to 4 days, so it is easy enough to bake just enough for the night’s dinner and use the remaining dough to bake fresh rolls for the next few nights.

Combine the warm water and yeast in a large bowl. Let the mixture stand until yeast is foamy, about 5 minutes.

Stir in melted butter, sugar, eggs, and salt. Mix in flour one cup at a time, until dough is too stiff to mix (some flour may not be used). Cover the bowl and refrigerate for at least 2 hours and up to 4 days.

Grease a 13 X 9-inch baking pan. Turn the chilled dough out onto a lightly floured board. Divide dough into 24 equal pieces. Roll each piece into a smooth round ball; place balls in even rows in the prepared pan. Cover and let dough balls rise until doubled in volume, about 1 hour.

I’m finally off the low iodine diet (LID). Yay! I had my whole body scan last Friday and as soon as I was finished with my scan, I was allowed to go back to eating normally. I went straight to the closest Thai restaurant. Extra iodine please. Now I’m patiently waiting for my oncologist to call with the results of the scan. Actually, I’m not patient, I’m a nervous wreck. It’s been 4 whole (business) days. I’m a mess. The waiting is hard, harder than ingesting the nuclear waste.

I made this bread while I was on LID. I don’t actually use my bread machine often, but I used it several times while I was on LID. I used it to mix and knead bread dough, so I didn’t have to do it by hand. I was tired. I guess I could have baked the bread in it too, but there is something unappealing about the shape of bread baked in a machine. I like the funky, organic shapes of the loaves I shape by hand. You could put the dough in a bread pan, if you like a more traditional shape.

For years I have just been following the recipe in the booklet that came with my bread machine. I was never thrilled with the results. I’ve been playing with my own recipe and I think I have finally got a version I’m happy with. It’s soft and stays that way for a couple of days. It’s great for peanut butter and jelly sandwiches (which is what I had a couple of times on LID). This recipe doesn’t make a very big loaf, but it’s easy enough to make another loaf.

Punch the dough down and turn out on a floured surface. Shape the dough into a loaf. Place on a baking sheet. Bake in the oven for 35 or until golden brown. Let cool completely before slicing.

If you do not have a bread machine, just mix the ingredients together by hand. Turn out onto a floured surface and knead by hand for 10 minutes, adding more flour as necessary. Place the kneaded dough into an oiled bowl and let rise 1 hour. Shape into a loaf. Bake at 350°F. for 35 minutes or until golden brown. Let cool completely before slicing. 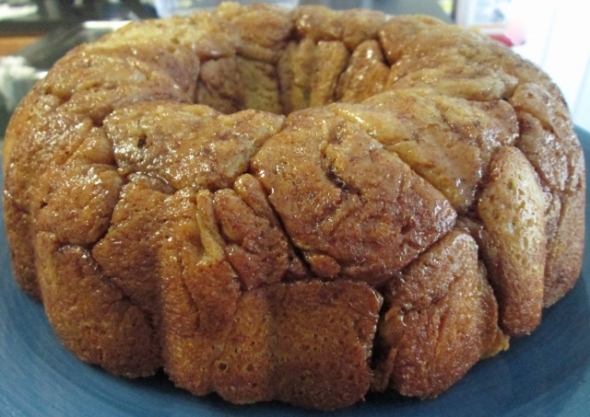 Monkey bread is a special breakfast treat that my family enjoys. There are a lot of monkey bread recipes out there that use canned biscuit dough. I’m not a big fan of those products since the vast majority of them are loaded with questionable chemicals and hydrogenated oils. I’d much rather make things from scratch so I know what is in it. Using a bread machine takes all the hard work out of making dough for this monkey bread. This recipe takes about 2 hours from start to finish, but most of that time is rising time. If you like nuts, sprinkle chopped pecans, almonds, or walnuts in between the dough pieces.

Place the 5 tablespoons of melted butter in a bowl (I just melt the butter in the bowl in the microwave for 30 seconds). In a separate bowl, combine the 3/4 cup sugar and 1 tablespoon cinnamon.

Spray a Bundt pan with cooking spray. With your hands or a pair of kitchen scissors, pull or cut off small pieces of dough (about 1 inch in diameter – it doesn’t have to be perfect). Place the piece of dough in the melted butter and then roll in the cinnamon sugar.  Place the piece of dough into the prepared Bundt pan. Continue cutting off small pieces of dough, dipping them in butter then sugar, and placing them in evenly in the pan until all the dough has been used. If you have extra butter and cinnamon sugar after all of the dough pieces have been placed in the pan, you can pour the remaining butter and sugar evenly over the dough. Let the dough rise in a warm spot for 20 minutes or until the dough rises above the top of the Bundt pan.

This is what mine looked like after 20 minutes of rising time: 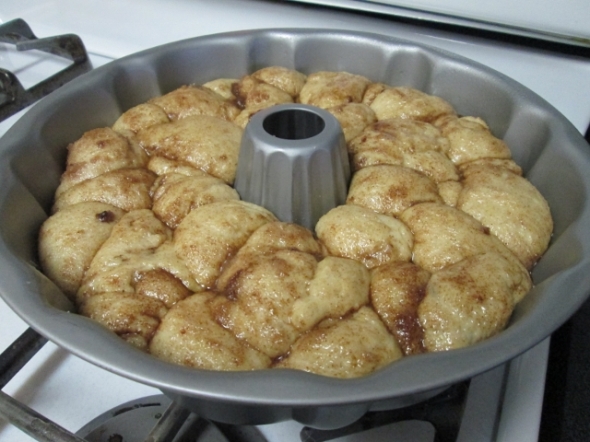 Preheat the oven to 375 degrees F. Bake the monkey bread in the oven for 20 to 25 minutes or until golden brown. Using a hot pad or oven mitts, place a large plate over the top of the Bundt pan. Carefully invert so that the monkey bread comes out of the pan onto the plate. Remove the pan.  Serve the monkey bread warm. 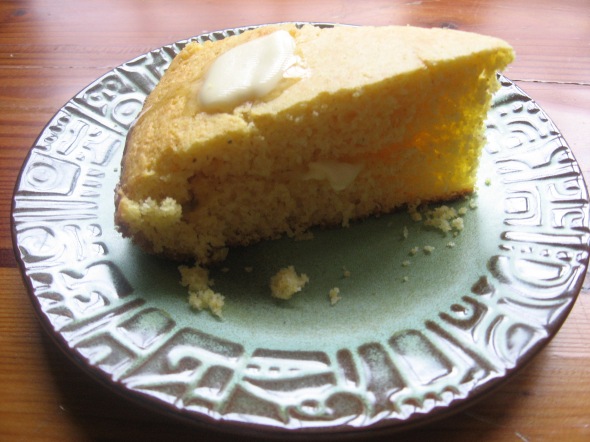 This is currently my favorite cornbread recipe. This is not like the cornbread I grew up with in Texas. The dense Southern-style cornbread my parents and grandparents made never had flour nor sugar included in the recipe. It was always made with buttermilk. The very addition of sugar makes this  “Yankee” cornbread. I actually like the lighter, sweeter, more cake-like Yankee cornbread. I also like beans in my chili. Shhhhh…..don’t tell anyone.

Combine the milk, oil, and 2 eggs in a small bowl.

Mix the wet ingredients into the dry ingredients, mixing until just moistened.

Pour into prepared pan and bake in the preheated oven 20 to 25 minutes or until golden brown and toothpick inserted in center comes out clean.

Isn’t this a beautiful loaf of crusty bread?

I found the recipe on Pinterest. This crusty bread is incredibly easy to prepare and it is comparable to something you would pay $4 or more for at a bakery. All you need to prepare this impressive loaf is an enameled cast iron pot with a lid.

I mixed up the bread dough and let it sit overnight. I baked it the next day. The bread bakes in the lidded enameled cast iron pot at 450 degrees F. That’s a pretty high temperature. There was a chemical/plastic smell in the house while the bread baked.  I’m pretty sure it was the handle of my enameled cast iron pot. My particular pot (Lodge brand) is oven safe to 500 degrees F., but I will probably remove the handle when I make this bread again.

I’m just going to post a link to the blog where the recipe originated. Janet at Simply So Good has detailed instructions on making the bread, along with fabulous pictures and many bread variations.  She also has a Q & A section for the recipe. Apparently, it is very, very popular. I can see why….this bread is amazing!

My husband was obviously trying to get me drunk last Saturday night because he kept opening bottles of hard apple cider for me to drink.  Since my last pregnancy and the subsequent breastfeeding, I’m out of practice and my alcohol tolerance is a bit low. I was only able to drink one hard apple cider and ended up with two open bottles. I hate to waste anything, so I put them in the fridge. Sunday morning I woke up thinking about beer bread and thought I could substitute hard cider for beer in my favorite beer bread recipe. I tweaked my recipe slightly, adding a bit more (brown) sugar and a dash of cinnamon. The house smelled so good and apple-y while the bread was baking. I was very happy with the results. The bread was not overly sweet, but had a definite apple taste. We enjoyed it. It made great toast the next day too. I think the additon of chopped apples and walnuts would be an excellent. I will have to try that next time.

Spray a bread loaf pan with cooking spray, then pour the batter into the pan. Bake at 375 degrees for 45 minutes. Cool completely before removing the loaf from the bread pan to slice. 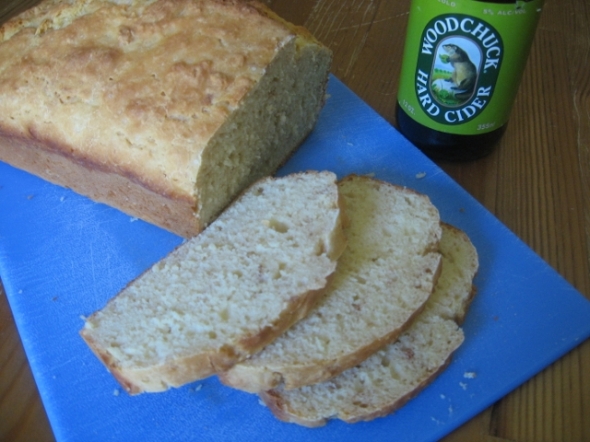 Recipes for Sustenance
Blog at WordPress.com.