One of the many joys of no longer having a thyroid is the non-existent metabolism. I have put on 17 pounds since my thyroidectomy surgery in January. Having been diagnosed with hypothyroidism over 13 years ago, I’m no stranger to the weight issues that go along with thyroid disease. Right before my thyroid cancer diagnosis, I was on a sugar-free, dairy-free, and gluten-free diet for 6 months. In that 6 months I lost a whopping 4 pounds. It’s discouraging. I don’t have room for extra weight so I have resorted to calorie counting. There are some great free apps out there to make it easier. I’m aiming for 1500 to 1700 calories a day for (hopefully) weight loss.

My hubby works late on Thursdays and I usually end up making something simple for my dinner. Last Thursday I roasted a batch of fresh okra. I love okra. Roasted Okra is totally addicting and satisfying too. Plus, it’s super easy to make. I used a jalapeno from my garden and it was super hot. It made for some SPICY Roasted Okra. It was so spicy, I got the hiccups. Do you get hiccups when you eat spicy/hot foods?

Vegetables typically have lower calorie counts than other foods, so it makes sense to eat more of them to aid in weight loss 1 pound of fresh okra has 124 calories! 1 tablespoon of canola oil also has 124 calories. 1 jalapeno has about 4 calories. This entire recipe (if made with 1 tablespoon of canola oil) only has 152 calories! So, there’s no guilt when I eat the entire batch of Roasted Okra by myself. : )

Preheat the oven to 450° F. Line a baking sheet with parchment paper or foil.

Cut the okra pods in half lengthwise. In a large bowl, toss the okra and sliced jalapeno with the oil. Season the okra to taste with Kosher salt, pepper, and preferred spices. Arrange the okra in a single layer on the baking sheet.

Roast the okra in the oven for 20 minutes, stirring once half-way through cooking. I like the okra right when it starts to crisp up and brown. 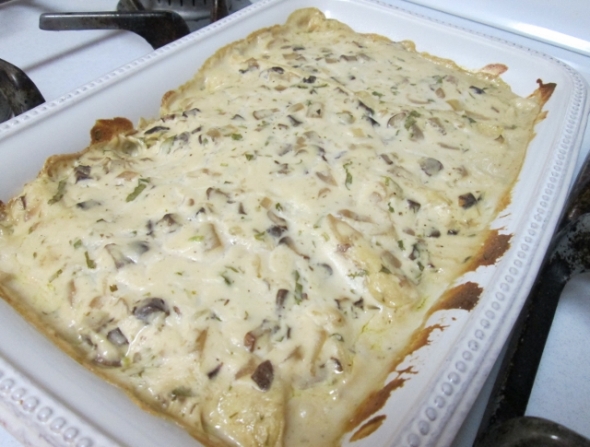 I picked up 8 ounce packages of baby bella mushrooms at Aldi this week for 99 cents each. Such a good deal. I’m becoming a big fan of Aldi, which is owned by the same company that owns Trader Joe’s. Aldi doesn’t have much in way of variety, but they have good prices, especially on produce. I got organic bananas for 69 cents a pound and a seedless watermelon for $2.99 this week. Just don’t get too attached to any one product at Aldi. The products are constantly changing.

We will be eating a lot of mushroom dishes this week. This is a variation of my Spinach and Mushroom Enchiladas with a Creamy Tomatillo Sauce recipe. In this version, the sauce is different. I incorporated some of the mushrooms into the creamy enchilada sauce. It’s delicious.

In a large skillet, melt the butter over medium-high heat. Saute the onions and mushrooms in the butter until tender. Add the garlic and cook 1 minute longer. Remove half of the mushroom mixture to a bowl and set aside.

In a saucepan, bring the water and vegetarian bouillon cube to a boil. Whisk the corn starch and garlic powder into the sour cream and then whisk into the boiling liquid. Whisk until thickened. Remove from heat and stir in the reserved mushroom mixture and the cilantro.

Divide the spinach and mushroom filling evenly between the 8 corn tortillas and roll up (not too tight) to enclose the filling. Place the enchiladas seam side down in the baking dish. Top the enchiladas with the creamy mushroom sauce. Bake the enchiladas in the 350 degree oven for 20 minutes or until hot and bubbly.