Despite the massive amount of rain we have gotten in the past few months, my yellow pear tomatoes are doing fairly well. Well enough that they are attracting dozens of leaf-footed bugs who are having their way with each other and my tomatoes. 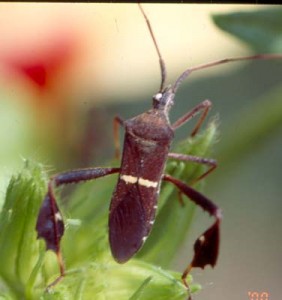 I won’t even consider insecticides and have instead started an all-out assault on these relatives of the stink bug with gloved hands, squashing them to death between my thumb and forefinger. It’s brutal, but such is life.

So, back to the tomatoes. My yellow pear tomatoes are doing well and I’m getting a bunch off of the one plant I have. My basil is not doing so well, but I have enough to make one of my favorite summer dishes, caprese salad.

Caprese salads come in many forms, typically made with larger slices of tomato and fresh mozzarella with a leaf of basil sandwiched in between. The tiny balls of fresh mozzarella, also known as bocconcini, were on sale at my local Publix. You can usually find them in the deli area of the grocery store. They are so cute and perfect to pair with my sweet yellow pear tomatoes.

I’ve been on a balsamic reduction kick lately. OMG, it gets thick, syrupy, sweet, and the flavor is intensified. It’s amazing. I could drizzle it on everything. I especially like it on caprese salad (and it was pretty darn good on the zucchini caprese paninis I made last week. Sorry, no picture and no post). To make a balsamic reduction, I just pour balsamic vinegar in a small saucepan over low heat and let it simmer, stirring occasionally, until it reduces by at least half and coats the back of a spoon. When it cools down, it will thicken even more.

This is not an exact recipe. Vary the amounts of ingredients according to need and preference.

Combine tomatoes, bocconcini, and fresh basil leaves in a serving dish. Drizzle with olive oil and balsamic reduction. Season to taste with salt (I use Kosher salt) and freshly ground black pepper. 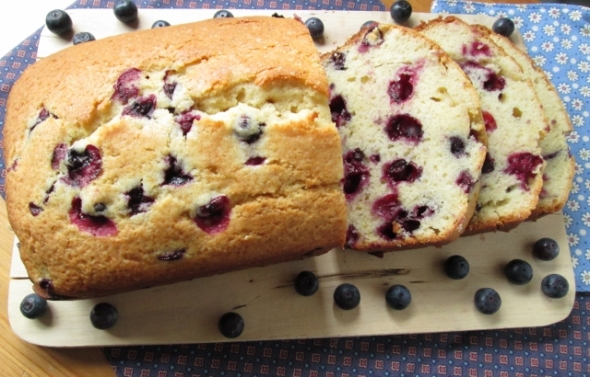 I have five blueberry bushes in my yard. I planted three of them the year we moved to this house. I didn’t realize there were already two mature bushes until the next summer. What a nice surprise. The three bushes I planted are still small and not yet producing much, but the other two have quite a few berries on them. For the past week or so, blueberries have been ripening on one of the mature bushes and I have already gotten at least 3 quarts of  beautiful berries off of it. 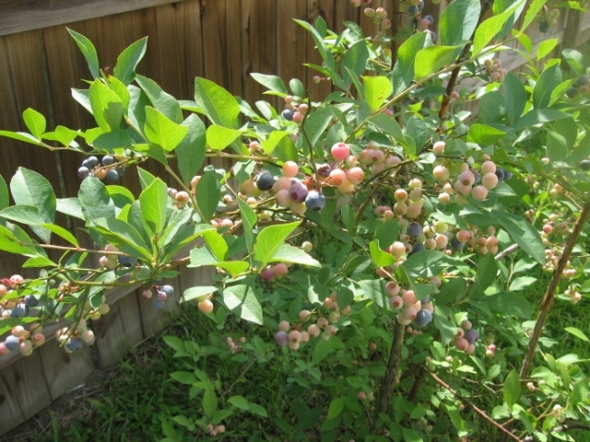 With the mild spring and plenty of rain, the conditions have been ideal for an abundant amount of sweet blueberries. I am just thrilled. Last year I wasn’t so lucky because the mockingbirds and squirrels were relentless and ate almost all of the meager yield of berries.

In a mixing bowl, with electric mixers, cream the butter and sugar. Beat in eggs, milk, and vanilla. Gradually mix in the flour mixture until just combined. Gently fold in the blueberries. Pour into the prepared loaf pan and bake at 350 degrees for 50 – 60 minutes or until a toothpick inserted near the center comes out clean. Cool for at least 10 minutes before removing from the loaf pan. Let cool completely on a wire rack.

Caponata is a Sicilian eggplant stew. I was introduced to caponata (served with fried goat cheese medallions) years ago at a long-gone tapas restaurant in downtown Fredericksburg, VA. I fell in love instantly.

We got our last Pinckney’s Produce CSA box of the season this week along with a challenge to create a recipe using the vegetables found in the box. The box contained Japanese eggplant, green bell peppers, tomatoes, poblanos, spaghetti squash, cubanelle peppers, cucumbers, butternut squash, and watermelon. I thought of caponata immediately.

Caponata can be eaten as a main course, side dish, or as an appetizer (think bruschetta). I thought it would be excellent on spaghetti squash.

While the spaghetti squash is baking, heat the olive oil in a large Dutch oven over medium heat. Add the diced onion and sauté until it starts to get soft, about 5 minutes. Add the minced garlic and sauté until fragrant, about 1 minute. Add the eggplant, bell pepper, tomatoes, capers,  and balsamic vinegar. Bring to a simmer and then reduce heat to medium-low. Gently simmer, stirring occasionally, until the vegetables are tender, about 30 minutes. Season with salt and pepper.

Scrape the spaghetti squash meat out of the skin with a fork, separating the strands. Arrange on serving platter/dish and top with the caponata.

Veggie Stir-Fry on rice vermicelli. Served with Nuoc Cham. #stirfry #eatyourveggies #noodlebowl #vegetables #farmers2neighbors
This week’s produce box from Farmers 2 Neighbors. They had such an overwhelming response this week that they had to stop taking orders as they were maxed out with the number of boxes they could fill and deliver. Awesome problem to have. Everything looks great. I love the variety too. A lot of different items from last week’s box. #farmers2neighbors #columbiasc #foodsharesc #sennbrothersproduce #freshproduce #fruitsandveggies
Salad with cucumbers, grape tomatoes, black olives, pecans, and goat cheese with a balsamic vinaigrette. #salad #farmers2neighbors
Blueberry Pound Cake. I’ve been baking a lot, but I’m going to have to start rationing flour. I haven’t seen any at the store in a couple of weeks. No yeast either. #quarantined #baking #hoarderssuck #blueberrypoundcake
I signed up to be a neighborhood captain for a temporary collaborative program between @foodsharesc and Senn Bros. Produce to delivery fresh produce to neighborhoods in Columbia. Here are the contents from the first produce box delivered this morning. Everything is absolutely perfect! #freshproduce #farmers2neighbors #happy
I’m finally off the low iodine diet! I celebrated with Shrimp Pad Thai. So freaking good! #lowiodinediet #shrimppadthai #takeout
Curried Potatoes and Green Beans. The joy of being on a restrictive low iodine diet for a medical procedure in the midst of a coronavirus pandemic. #atleastihavewine #lid #lowiodinediet #thyroidcancer
Day 13 on a low iodine diet. Some days are good. #fml #donteatthepotatoskin #lid #lowiodinediet #steakdinner #redwine
I’m on a low iodine diet for 3 weeks and can’t eat a bunch of stuff including dairy products and egg yolks. I made these vegan cinnamon rolls today and they are so good. #lowiodinediet #lid #cinnamonrolls #thyroidcancer #vegan #breakfast
My version of Hot and Sour Soup. #afavorite #soup #hotandsour #lowcalorie #vegetarian
I don’t eat chicken wings often, maybe once a year at most. I bought a package so I could use up a bottle of Frank’s hot sauce. I am also working on some new low iodine diet recipes. A low iodine diet helps prepare one’s body for radioactive iodine that is used for treatment of thyroid cancer and in some cases, hyperthyroidism. The diet is also needed when radioactive iodine is used for nuclear whole body scans. #themoreyouknow #chickenwings #lid #lowiodinediet #thyroidcancer #thyca #rai #radioactiveiodine
I forgot to post the Chocolate and Coconut Cream Fondue I made for Valentine’s Day. #sogood #decadent #chocolate #chocolatefondue #dessert #valentinesday