I got turnips and rutabagas in my CSA box. At first, I did not know what I was going to do with them. Turnips, rutabagas, and potatoes are kind of similar and I thought they would probably taste great together. I took the idea further with the addition of other root vegetables like carrots and onions. I was super happy with the way this soup/chowder turned out…so good. Seriously, so good. Hoping for more turnips and rutabagas in next week’s box. 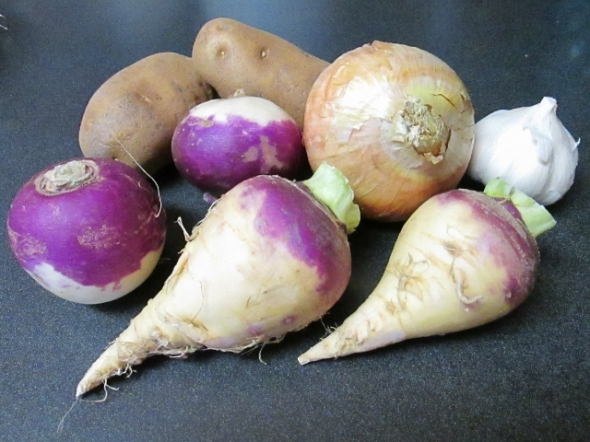 Melt the butter in a large pot over medium heat. Add the chopped onion, minced garlic, and sliced carrot, and cook until onion softens, about 5 minutes. Stir in the flour, and cook, stirring, for 1 minute. Whisk in vegetable broth, and bring to a boil. Add the diced turnip, rutabaga, and potato. Season the soup with salt and pepper. Reduce heat, and simmer until the root vegetables are tender, 10 to 15 minutes. Stir in the cream and heat through. At this point, I like to take a potato masher and break up some of the root vegetables. You could puree the soup if you like it that way. Serve the soup in bowls. The soup is delicious topped with a sprinkle of dill.

2 Comments on “Root Down Chowder”